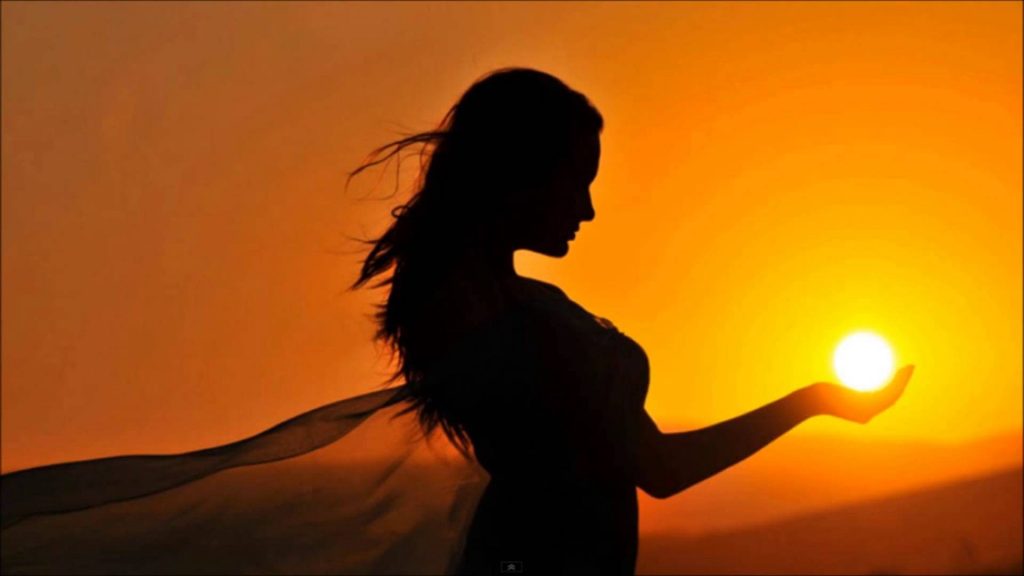 Light has a profound affect on our mood and our physiology, it also nourishes many of the plants that give us sustenance. Yet, how often do we consciously consider light as part of a healthy diet? Here is a mindful approach to using light to nourish your body, mind, and spirit.

Humans did not evolve indoors under artificial light, our biology developed in harmony with the cycles of the sun, moon and seasons. For this reason, we have a built-in clock for physical, mental, and behavioral changes that follow a roughly 24-hour cycle. Plants, animals, microbes, and most other living organisms, also have a circadian rhythm which is primarily influenced by a relationship with light.

In humans, it is our pineal gland, part of our endocrine system, that helps us translate external light (or darkness) into biological processes internally. It does this through the production of melatonin which is a derivative of serotonin. The relationship between sleep, melatonin, and serotonin has a profound influence on mood, depression, creativity, mental clarity, and other important aspects of health.

Evidence shows that on sunny days people are more optimistic about the stock market, report higher wellbeing and are more helpful, while extended exposure to dark, gloomy days can result in seasonal affective disorder. -Alison Jing Xu, an assistant professor of management at the University of Toronto Scarborough

Dr. John Ott, author of Health and Light found that when he changed from incandescent lighting to fluorescent lighting that plants would suddenly change their growth pattern. This discovery inspired him to start testing the effects of light on animals and found that they were also affected by different kinds of light. For example, pink fluorescent lights harmed mice causing their tails to wither and fall off, they also to developed tumors and died in an average of 7-1/2 months.

Cholesterol level in the mice rose sharply under certain dark blue fluorescent lights. While males became obese, females did not. The heart cells of chicken embryos weakened and ruptured under a red filter. Other types of light caused problems like sexual changes, aggressiveness, hyperactive behavior, aimlessness and disorientation in mice, rats and other animals. The discoveries of John Ott demonstrate that sunlight is an important “nutrient” for a healthy glandular system.

Returning Ourselves to Natural Light

Before electric lighting, firelight was the first light humans used for seeing after the sun set. This natural form of warm, yellow-red light does not interrupt our circadian rhythm and melatonin production but lightbulbs and video screens do. Not only do many of these modern forms of light inhibit melatonin production and interfere with sleep quality, most do not emit the full spectrum of light that is provided by the sun.

For example, the original fluorescent lights used in factories and classrooms had a slow flicker that contributed to stress and also headaches. The newer CFL’s flicker at a much higher rate that is not as problematic though some sensitive people still complain that fluorescent lights have a negative affect on their mood. Full spectrum lightbulbs have been shown to elevate moods and help with Seasonal Affected Disorder (S.A.D), which is the depressed, gloomy feeling many people experience during long grey winters.

Regardless of the quality of indoor artificial lights, their usage rarely corresponds to the cycles of the sun which our circadian rhythms have evolved to respond to over millennia. The main culprit for interfering with melatonin production, and sleep cycle is the blue light we experience on the screens of our television, computer, and mobile devices. Though we may be enjoying time in front of our screens after the sun sets, this interruption of our circadian rhythm and sleep patterns can open the door to a whole bunch of health issues.

Luckily, apps like f.lux and others can filter out the blue light on our devices. A simple internet search will help you find one that is right for you. As silly as it may sound, some people wear red sunglasses or blue-light blocking sunglasses when they watch their evening movies and have reported favorable results!

Vitamin D and the Sun

The warmth of the sun on our flesh almost always makes us happy, and when large amounts of our skin are exposed to the sun, our body produces vitamin D. The type of light that helps with this is Ultraviolet B (UVB). Vitamin D is well-established for its’ role in bone health but recent studies also suggest that it plays a role reducing the risk of cancer, heart disease, stroke, diabetes, autoimmune diseases, and more. Sunscreen applied to the body can be damaging to coral reefs and inhibit the sun from helping the body to produce vitamin D. The initial research about the sun and melanoma, which helped the sunscreen industry boom and fueled commonly held beliefs is not accurate today.

In 2003, a landmark eight-year study of 106,379 Scandinavian women published in the (American) Journal of the National Cancer Institute by an international team linked melanoma to sunburns (not tanning), blonde or red hair, and numbers of moles on the legs. A second article in the Journal of the National Cancer Institute solidified what had long been reported, but not quite believed: People regularly exposed to daily sun have a lower risk of getting melanoma and also have a higher survival rate if they do because regular sun exposure protects against burning, a finding later confirmed by a landmark 2008 World Health Organization (WHO) International Agency for Research on Cancer report. –America is Getting the Science of Sun Exposure Wrong (citations available at this page)

Suspended in the Larger Field

Light is only the field of electromagnetic energy that human eyes can see, yet it extends infinitely beyond what is visible. This energetic field influences and effects us on the conscious and unconscious levels. We human beings are electrical beings with a physical body and an energy body, so our relationship with light is very important.

It is beautiful that our physical being is regulated and informed by light. In what other ways do subtle energies inform, shape, and regulate our physical bodies and the world around us? Science is at the very beginning of exploring this phenomena and it is exciting to see where spirituality, science, the physical, and non-physical overlap.

Improving your Relationship with Light

Making the unconscious become conscious (shedding light) is the journey of spiritual growth. Notice the ways that light and shadows influence your mood. If you are feeling sad, open a window and let more sunlight in, or go out for a walk. If it is raining, take some time to sit under a bright full-spectrum light and see how your mood shifts. Put a blue-light blocker on your computer, mobile device, or television in the evening and see how your sleep cycle improves.

Just like a lighting technician in a theater is able to shape and control moods with light, you can find creative ways to do this in your home or work environment by increasing your exposure to natural light and the sun. Being conscious of the role that light plays in our lives helps us to lighten-up. This mindfulness will allow you to utilise the nourishing power of light to improve your physical, spiritual, and emotional well-being!